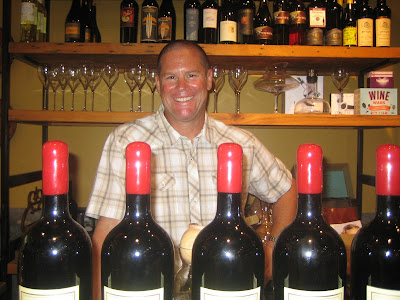 Women- when a man says something is GOOD, he means  GREAT.

James Franklin, manager of NapaStyle in Costa Mesa says Rick Bayless'  Salsa Baked Cheese is GOOD. Read the recipe: you too will salivate.
If you are unfamiliar with Rick Bayless,  Rick is a Midwesterner who made his mark in the culinary world cooking cooking and writing about authentic Mexican cuisine.

Californians may have a hard time wrapping their arms around the significance of this. To illustrate, when my brother in law, Eric Plunk, began pitching  for the Cleveland Indians in 1992, his request for a care package from home was for tortillas and other makings of Mexican food.
Through introducing the world to the tastes of Mexico, Rick is to the culinary world what Christopher Columbus is to American history
In Lydia's Personal Thesaurus -James Franklin  is listed as synonymous with hospitality.  Michael Chiarello is a genius to have snatched him for NapaStyles client enlightenment.

James duties include curating the "Enoteca" - the library section of the NapaStyle wine selection . Be adventurous. Let James choose the wine-  for only $2.00,  he will pour  a tasting from the "stacks". More conservative? He has a list of whites and ports you can "call" for 1 taste at $7.00 or 3 tastes @ $15.00. This is a value not happening with local restaurateurs. Go for it!
Trusting James, I let him choose. He poured the Longboard Vineyards Sauvignon Blanc which made my aqua eyes brighten. This darling white 2008 vintage was born fog belt of  northern California's Russian River fog belt. Crisp, balanced, gently nuanced-for $2.- this is the scene this writer tasted. I am sitting at sunset on honeysuckle covered cottage porch at a beach, eating slices of peaches and popcorn with my girlfriends. One of them reads the back of the label-
"Stay loose, trust your own palate, get wet often and spend more time surfing and sharing life with friends and family and less time reading the back copy of wine bottles." We giggle- and open a second bottle.
This previewing a wine. It's so American. Like being able to date before getting married.  Cheers!
NapaStyle Costa Mesa is located in the South Coast Plaza

The wine sounded heavenly! Loved what you imagined while tasting that one wine. Me? I just drink it and don't think. lol
Sounds like you had a great time. So is that bottle on your computer desk one that you bought yesterday?

If you can make it to the grand opening of the headquarters today we will offer you a delicate California white or red wine, whichever you prefer. Even tho one bottle is priced at what one "tasting" cost you yesterday, we still enjoy Two Buck Chuck! :):):) Perfect for a large gathering as it won't break the bank and is still good.

Hi Trisha! The label was indeed on top of the computer desk. I was writing about it when hubby got up and wondered why his wife has a bottle on her desk while he is just starting his first cup of caffeine):-

Wine at headquarters? Keep it up and the Democrats might loose their reputation for "best political events".

Will play attendance by ear. This is a major first things first month. Blessings for ALL you do.

Loved your description of the white vino...sounds like something I need to taste at the least but would find a bottle to my liking the best. :) From your description it sounds like that killer New Zealand BG from 2007 that I had a glass or two of at the Turf Club, Santa Anita a few months ago. It was soooooo amazing that I tracked a bottle of it locally. It sounds very much like this one.

I love Napa Stle and their offerings. Wish I could've joined you to partake. I will start reading the backs of the bottles to see what interesting quotes I can gather.

Glo and I found several offerings in the No. East corner of Washington unexpectedly. Woweee!

Loved readomg abpit the "our". The Crab Cooker's motto is East Lotsa Fish. I guess we should drink lotsa vino from Napa Styles's Wine Cellar.

If you are having trouble with link to recipe- please cut and paste this into your browser.

As a suggestion to those you wrote in asking about a substitution for the goat cheese- ricotta comes to mind.