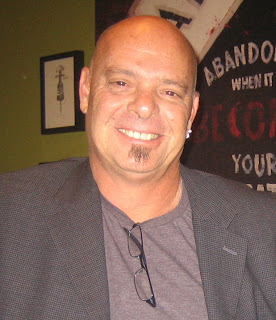 Oded Shakked's name means, "Encourage the almond tree." As his life path has been like the almond's, perhaps his name was a driving omen.  According to Wikipedia- "The almond is a native to the Mediterranean climate region of the Middle East...(moved) along the shores of the Mediterranean into northern Africa and southern Europe and transported to other parts of the world, notably California, United States."

Israeli by birth, Oded came to California seeking more exiting waves than the Mediterranean offered. Studying vino culture at UC Davis in the 1980's made for spellbinding attention to his college homework. Now founder of Longboard Wines, the surfer and former professional builder of boards explains the trinity of his two loves,wine and water sport as, "Balance, harmony and nature." From the website, "Surfing is part sport, part meditation and all working within, rather than against, nature. Wine making? Pretty similar approach." 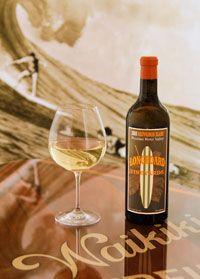 James started my wine ride with a splash of Longboard's crisp Sauvignon Blanc.This delightful wine is light and leggy: a smiler. Its a tell- good -stories- to- friends- on- the- patio, serve with ripe melon followed by a plate of fresh fish kind of wine. It is as if this wine was born with a mission: to cleanse the mind of worry- like the scent of  sea air.
This week Tom Clare and Michael Melgoza of Longboard have been pouring wine and legend in Orange County, extolling the virtues of the brand's refreshments. Longboard wines are contemporary; not overwrought with ornamentation. Aging aided by vintage oak barrels, each varietal is an authentic representation of its heritage.

Next up: the Longboard Pinot Noir. This is a flirtatious  little gem. Kind of like the bad boy in chick-lit who  tempts the heroine to go a little further...only her resolve to do the right thing keeps the misbehaving appropriate:- .
Chasing sips with samplings with tiny bites of Three Sister's Serena Cheese, my mind conjures up an image of a couple flirting from a bar stools, the firelight's reflection  flickering through the ruby refreshment of this enchantress wine-  the couple goes to pour one last glass- only to ask," Why is the bottle empty?"
An alternate storyline for the Pinot. Our heroine sees potential in the the bad boy, like no one has, except his mother. She wants to tempt him  into becoming a keeper. She goes in the kitchen and does what smart women have done throughout the ages- she puts on an apron to whip up a spell.


Boiling salted water in a deep pot, she stirs a steady stream of Polenta, her hips swaying slightly to Spanish guitar. After all the water is pulled into the polenta, it pulls away from the sides. Into this cauldron goes  puree of jalapeno, shreds of Swiss cheese, gratings of Serena, pats of Irish butter and confetti of chive and basil. Our heroine hums the whole time, knowing the man hasn't a chance. One bite: she owns him. ﻿
Posted by Lydia at 12:33 PM

Those shoes are ADORABLE, as is that dear little girl. It sounds like you had a grand timd at the Wine Tasting....I know very little about Wine or even how to describe a wine the way the experts seem to---I LOVED your explanations! I could "get" what you were trying to say about each wine. Thank You for that, Lydia.

While I'm not much of a pinot drinker (a dry sauvignon blanc or an oaky charonnay is more my style), I absolutely loved your description of this pinot!

As one who appreciates a great glass of vino with "nibbles" or full blown meals, hats off to the writer for making review of these wines such a pleasant experience. The backgrounds on the winemakers themselves added a great dea; tp the piece. Great review of trips to Napa Style. Edda

een doing this for a while now and it is not often that I get to wear a big Cheshire smile (like I am now) after reading how someone translates our passion into words. Bravo!, in fact, Bravissimo! You can teach some stuffy professionnal writers a thing or two about passion and authenticity. Thanks for the compliments (and BTW, I was not a Pro surfer, just an average Joe surfer and a professional builder of boards). Knowing we can create special moments in peoples lives keeps our fires stoked! Mahalo.

Thank you for ALL for writing in.

Especially for the text correction. Will take care of in the morning when my brain cells drop in for a visit):-