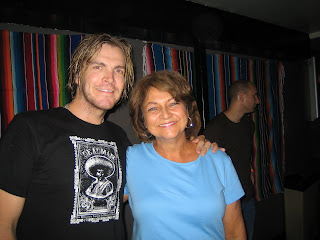 "It’s been a long road to get here and stand before you as a new male vocalist,” Ingram said in his acceptance speech tonight. “To anyone who has played my music on the radio, anyone who has come to a show with three other people in the audience, anyone who has been moved by the words of my songs, and anyone who has big dreams and high hopes…DREAM IT, LIVE IT, OWN IT. In the end the only thing that is important is not giving up.”

Jack Ingram started recording in 1992. Tonight, in March 2008, at the 43rd Annual Academy of Country Music Awards he is named new male vocalist. YAHOO!
The first time I saw Jack perform, I had not a clue who he was. I was a newspaper editor who snagged a couple extra tickets to a CMT Outlaw taping Toby Keith was doing. Along for the fun were a couple girlfriends.

This fine looking young man strode on stage with the presence of a young Mick Jagger, without any of the annoying mannerisms. He didn't just sing "Never Knocked Me Down". He lived it. And so did every one in the audience. Including the young lady with me, who had cancer.

This was Cobi's first night out since she was given that awful diagnosis. Since was largely responsible for my discovering the music of Toby Keith, I hoped hearing him would lift her spirits. We didn't make through the whole evening. Her energy wouldn't let her. But there was a difference in her demeanor after Jack's words to not give up. She started to fight. To live.

The next time I saw Jack Ingram was at an in-store acoustic performance at the now defunct Tower Records in Brea. It was a rainy Martin Luther King Day weekend. It was pretty close to a private performance.

Getting a couple CD's autographed, I mentioned what hearing "Never Knocked Me Down" that first time meant to my friend, whom I judged to be not much older than he. He stopped writing and looked up. Jack asked, "How is she doing?"

Which is why I am so happy for his success. This is a man has a heart.

Jack's voice isn't pretty in the conventional sense. It's better. It's masculine. It's strong. It's authentic. It takes the listener on a primal journey through the range of all our human emotions. 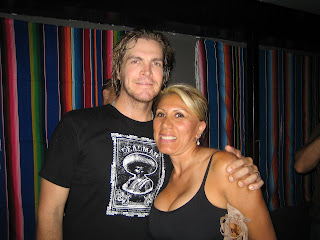 My hairdresser and friend, Sylvia Claborn, went with me to hear Jack with me at the historic Whiskey in LA. Towards the end of the show, he was telling a story about one thing he knew for sure, that there was a price to be paid for everything. The price he was paying at that moment was having to be away from his family. He threw his guitar pick in to the audience and moved away from the microphone. You could feel the tug of his ambition to perform give way to the tender love of his family as he gave the simple words of "Goodnight Moon" eloquence by singing just as though he were at his child's bedside. Tears ran down Sylvia's face.


Congratulations, Jack! Thank you for the inspiration to work through the struggles when you believe in what you are doing. We did eventually lose Cobi too young to the cancer, but not without her fighting back. Your asking how she was doing was a little bit of grace to her at a time she needed a lift.
To learn more about Jack. please go to http://www.jackingram.net/default.htm
Posted by Lydia at 11:11 PM

I have been a huge fan of Jack Ingram for years. I have called radio stations, emailed video shows and even written talk shows promoting Jack and his music. I have traveled many miles to see him perform. Several days ago it finally hit me what it was that makes Jack different than most other musician/songwriters. Your comments were exactly what conclusion I had come to. Jack lives his music. His words toch more than just your ears, they touch your heart. I am glad that you had a chance to see what a great guy Jack is. He is truely that caring.

I loved what you wrote and hope you get a chance to see Jack again soon.

Nice to meet you, Jean.
Thank you for dropping in.

Plato described how I feel about Jack's performance. It "gives soul to the universe, wings to the mind, flight to the imagination and life to everything."

May be some day we'll meet at one of Jack's shows.