Cast of Characters and Opening Logistics

﻿
﻿
The day before the wedding it was pouring in Southern California. The weather prediction was 34% chance of rain. Were we glad to see Palm fronds waving in the sky? You betcha.

Traffic can be tricky in Southern California, however with many schools already on vacation, it was clear sailing to Long Beach after dropping the puppies off for their adventure in boarding school.
Wedding parties arrive ahead of other passengers, which made it easy to find our group. Our ID's were checked for cruise or wedding only.

Some of the cousins flew in from Wyoming, making the most of the opportunity by attaching tourist fun to the trip

4 days limited the number of people who could stay the full cruise. Being able to make arrangementsfor people who have a long-standing relationship with the couple allowed the ceremony to be more emotionally complete.


﻿
﻿ Loyalty and fidelity are typical of Kenny. The "men in black" above- they have known Kenny since kindergarten. I don't expect that is the social norm among males in a mobile environment.

The taco truck did a brisk business before we were called on board.  Many of the missing in these photographs were grabbing bites from what Californians affectionately call "roach coaches"):-

Most of the cruisers had to wait to get in their rooms. However Shannon had use of her parent's suite to dress, and Kenny had use of ours. Until she walked down the aisle, the groom did not see the bride. 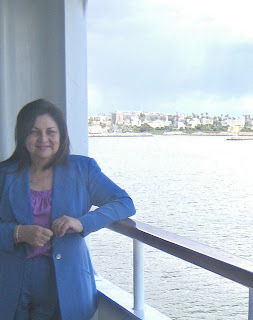 Probably the best splurge for us was to book a balcony room. The plan was easy access to fresh air and maybe company to enjoy the bottle of bubbly in our cabin. Room service was quick and we're much more at ease on our own than in the packs that roam on deck.
The best practical decision (behind boarding the dogs) was to take the cell phones with us. Useless once we crossed into Mexican waters, the logistics of the first day were much more easily navigated with communication. At the end of the trip, when we had to coordinate finding Trevor to get him to his LAX flight- the peace of mind  in coordinating his departure with ours was priceless.

As a working journalist- turning off the instinct to record every event needed to be turned off. My role was to be the  mother of the groom. Hence the photo record is not complete. However, my gene of observation cannot ever be totally disengaged.
This is my struggle as a writer. To observe. To report. Yet not to invade privacy.
Privacy is a commodity too often bought and sold by writers more interested in being famous (or infamous) than in being good.
When my coffin is closed. I don't want any one to remember me as being Lydia Plunk, provocateur. I just want to be remembered as having succeeded as basically good more often than not.
Posted by Lydia at 3:24 PM