The Royal Wedding :Nests,Hats and All Things Horticulture

In the context of who what and where, today's Royal Wedding was pitch perfect. Joyful and reverent. Appropriately rooted in faith.  Far down the scale of priorities, the lady guests provided visual lessons on a great cultural divide across The Great Atlantic Pond to my little outpost on the far side of the North American Continent.
The British Sentiment
"A hat is a flag, a shield, a bit of armor, and the badge of femininity. A hat is the difference between wearing clothes and wearing a costume; it's the difference between being dressed and being dressed up; it's the difference between looking adequate and looking your best. A hat is to be stylish in, to glow under, to flirt beneath, to make all others seem jealous over, and to make all men feel masculine about. A piece of magic is a hat."
-Martha Sliter
The  True Westerner's Sentiment
"Her hat is a creation that will never go out of style, it will look ridiculous year after year.”
Fred Allen
Now, I LOVE my feathered friend flocking to the feeders;

But I would never pin one to an artificial nest stapled to my head.
The prime minister's wife took a bit of criticism for not wearing a hat to the Royal Wedding. Since the Pope struck the requirement for women needing to cover their heads in church(when I was in second grade),  Westerners wear hats as functional (such as for gardening, horseback riding, golf,  costumes and bad hair days) rather than for decoration. From this continent to the island that once ruled us- perhaps the criticism ought to be aimed away from well-groomed hair to some of the concoctions on display atop heads.  My western sentiment is that the bare heads are respectful to other guests sitting arrears.  Imagine trying to watch the ceremony from a seat not on a front aisle through a sea of these impediments? ﻿ 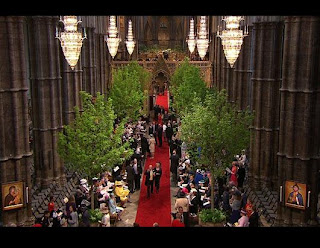 20 foot trees line aisle ABC News APTN/AP Photo
Shane Connolly was chosen by Prince William and his Catherine to oversee the horticultural displays for they day owing to his reputation for elegant and sustainable approach to floristry which is centered on the use of living plants and trees
In the consummate "bringing the outdoors in" the Royal couple walked down an aisle lined with six English Field Maple and two Hornbeam 20 foot trees   grown in planters built by craftsmen at The Prince of Wales's Residence, Highgrove. The floral palette of bblossoming azaleas, rhododendron, euphorbias, beech, wisteria and lilac must have had the abbey scented like the countryside. After May 6th, the plants will leave the Abbey to be donated to charities or replanted, some at Highgrove.

The bride's bouquet drew on the traditions of flowers of significance according to the Language of Flowers and the two families joined through matrimony. Shane Connolly's gathered together


Myrtle: the emblem of marriage; love.  ( a sprig of which is an offspring from Queen Victoria's 1847 wedding bouquet.


Congratulations to the Newlyweds.  My hat is off to you. If I wore one):-

Oh Lydia,
I am laughing at your last comment "My hat is off to you, if I wore one". Cute! Yes, you did show two of the worse "hat" creations I ever looked at! There were several others too but I think Princess Beatrice took the most silly prize! It reminded me of the headdress Cleopatra wore when she entered Rome with her child with them both wearing gold.

Someone on my FB said they think they threw hats off the Tower of London and this was the results! LOL
I LOVE hats as you know and don't feel I am totally dressed unless I am wearing one. However, when I think about my collection of them I think how plain they are! Maybe I need a birds nest or two on each! LOL
Well, whatever is thought about those hats I loved most of them! So many beautiful ones.

Hugs, Trisha
p.s. I would like to know what's up with the prime minister's wife. She looked tacky to say the least even tho I loved her necklace. All the guests were sent an extensive list of rules of dress and what was expected of them. A hat was on the list for the ladies and no bare shoulders. I wonder why she didn't follow protocol??

Sarah Brown (PM's spouse)-look up photos of her with a hat on. The little hair pin was a much better option for her style and physical traits. Hands down, she looked better yesterday without the hat on than she's ever looked in public wearing one.

Leadership's twin is criticism. It comes with breaking tradition.

If Mrs. Brown gives courage to women who are not totally comfortable with the eccentric hat fashions on the UK- GOOD for her.

Otherwise we might have seen my little woodpeckers English cousins pecking about her hairdo):- .

You have your ladies mixed up, or should I say prime ministers. David Cameron is the PM and wife is Samatha.
They are conservatives but even tho, I thought she looked terribly out of place.

LOL. Thank you for the correction. Should have finished that second cup of coffee before writing about people I don't follow):- on a night I typed until after 2am. I haven't really followed the British electeds and their spouse's since Tony Blair left...

Think I'll put that gardening hat on to see how the tomatoes which went in yesterday are doing. Then on to "plant" bricks".

There is whole flock of orioles breakfasting. Hope my hat doesn't scare them off. But atleast it isn't one which invites them to nest in or call out, "look, it's cousin Shelly's feathers on top of Lydia's head."


Whatever her name, I would rather sit behind her at an event than most of the others.

That's really cool about the myrtle being offspring of the tree that provided the Queen's bouquet years ago. A little like growing a rose that's grown from something introduced into commerce a hundred years ago.

Nikki- I do believe the myrtle was originally from a nosegay presented Victoria before the couple married. If I had such a treasure- if the house was burning- I would dig it up before I rescued photo albums.