The Saturday Before Easter. We Interrupt this War


After 30 Years of Peaceful co-existence, the squirrels have broken the treaty. They crossed the line of demarcation. They have discovered they can climb the bird feeder pole. But like this Chestnut tree, it is a matter than can wait until later.
﻿
﻿ The advantage of a late Easter is the garden is dressed and decorated to camouflage Easter eggs. 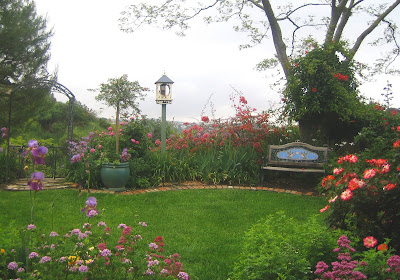 Speaking of which, the Inbox this morning held a nice recollection of Easters gone by

I'm thinking of the Sat. before Easters past which was always the day we dyed the eggs. Good Friday they were boiled after church services, dozens upon dozens. Mom was the master mixer using food coloring from those little bottles during WWII. Dad fashioned a "pencil" out of the wax used in canning so we could draw designs on them before dipping and dip we did with many ooooh's and aaaaaah's and look at mine's. :) Not only did Dad do the pencils he taught us to wrap the eggs with kitchen string to make designs. We got them ready for the Easter Bunny to pick up and hide in "our" yard. Doggone it there wasn't always one of them not picked up and found months later when the flower beds were being cleaned up for Spring. Smelly business that was."
- Edda Gahm

Martha worried about everything
The Samaritan woman was divorced, more than once
Zaccheus was too small

Paul was too religious
Timothy had an ulcer...

AND Lazarus was dead!

It seems a good day to explain why choose to be a Christian? Because no father would have his son's heritage denied. I believe in a God who created a Universe, who understands its workings in a way man never will. He understood the importance of the drama which began in Bethlehem and ended with Easter.
Why a father would allow a son to be scourged, hung on a cross and mocked- for us- when He had a choice. That is LOVE I cannot deny.
Perrson's Nursery
3115 E Sierra Madre Blvd
Pasadena, CA 91107
Posted by Lydia at 9:49 AM

Email ThisBlogThis!Share to TwitterShare to FacebookShare to Pinterest
Labels: beauty in the garden, Decoration, Faith, Friendship, Holidays, lessons from the garden, nature

Interesting. The War of the Squirrels. And nice our Judy and Edda could contribute to your blog.

My squirrels are the same, having discovered the bird feeders. So I make a point to put cracked corn in a bucket they can climb into and they leave the bird feeders alone now! xo

Good morning, Sue! Perhaps our local squirrels would like to relocate your way- that would solve so much):- .

I shall have to research. What physical barriers can go on a pole and what plants might emit an odor they don't like- see if we can distract their tastebuds to the outback- where they can play as they like. Until-

The wilderness behind is technically called a "mortality sink". Easy to get in- then the wildlife gets caught or is so enticed, it doesn't leave until starvation and sickness take their toll on individual species.

Right now there are so many birds at the Victorian feeders- atleast 3 orioles, it doesn't matter. No room for a squirrel to climb up to rob it.

Lydia, What a surprise to have the honor of having family Easter memories posted on your blog this morning. Thank you.

It's just a small girl's memory of Easters gone by.

Lydia,
Yes it was a great read of Edda's small girl memories.
You girls talking about squirrels. Since we no longer have a dog they make our backyard their hang out. Pete and RePete are the two original ones. One always following behind the other. Then there were three! John puts nuts and goodies out on the block fence posts for them. Now he has a pan of water out for them so they don't drink the pool water.
Fortuntely they don't bother our other "loves', our flock of hummers. It is such a joy to watch them all as I sit on the patio. If they come too close to me I tap my foot and they scurry off. (The squirrels not the hummers! LOL) The hummers swoop over my head and at times come close to see if my red hair has any liquid in it for them! lol Funny!